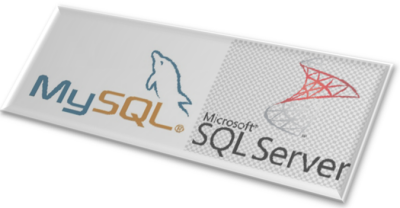 When considering a utility for data management the two most popular choices are MySQL and SQL Server. Both are efficient at keeping your data organized and readily available through a user interface. Both technologies have the concept of schema (that is table storage) for data storage.

SQL is a language.  Specifically, the “Structured Query Language” Now it would be better if we start differentiating the topic as difference between SQL server and MySQL and take them point by point

The MySQL development project has made its source code available under the terms of the GNU General Public License, as well as under a variety of proprietary agreements. MySQL was owned and sponsored by a single for-profit firm, the Swedish company MySQL AB, now owned by Oracle Corporation.

SQL server is owned by Microsoft and is typically referred as Microsoft SQL Server. It has a long history of releases and it is updated often adding all latest trends and technologies to it thus making it one of the trusted data base applications today. At the 2011 PASS summit on October 11, Microsoft announced that the next major version of SQL Server, codenamed Denali, would be SQL Server 2012. The release date is set to the first half of 2012.
Strengths: SQL Server and MySQL

To give a better idea of the differences in MySQL and SQL Server -MySQL is geared more toward selecting data so it can be displayed, updated and saved again. MySQL is weaker in the areas of inserting and deleting data. But it is an excellent choice, for data storage and referencing data.

Here are some specific technical differences in MySQL and SQL Server when it comes down to the ANSI SQL standard: Features like stored procedures, triggers, views, and cursors became a part of the MySQL database server in MySQL version 5.0 and still you won’t find a rich feature set in terms of development functions and capabilities. However MySQL’s stored code-objects are close to ANSI standards, but again, they don’t have the breadth and depth of T-SQL, Microsoft and Sybase’s proprietary extension to SQL

Security is a major concern for data management. Both technologies, that is MySQL and Microsoft SQL Server, are EC2 complaint and make sure that they have adequate security support for building government applications.  Going down the line Microsoft’s SQL Server, leads the way in offering all-round security features, as Microsoft’s Baseline Security Analyzer helps administrators ensure that the SQL Server installation is up to date. MySQL has no such tool to do so.
Support: SQL Server and MySQL

Both SQL server and MySQL has the support from their respective vendors both in free and paid form. MySQL as we know is now a subsidiary of Oracle which is a Capability Maturity Model (CMM) level 5 company and offers support via technical representatives and ”Virtual MySQL DBA Assistant”.

On the other hand Microsoft has been pioneering SQL server over years and assures assistance on its SQL database and Cloud storage. Further more a free Microsoft SQL Server Migration Assistant (SSMA) makes it easy to migrate data from Oracle, Microsoft Access, MySQL, and Sybase to SQL Server

MySQL has the stable version of MySQL 5.5.19. Microsoft’s SQL Server is currently available as SQL Server 2008 R2. SQL Server 2012, with many new features, was announced in the Pass Summit, October 2011, and is expected to be available in the first half of 2012.
Conclusion: MySQL vs SQL Server

As we have seen the difference between SQL Server and MySQL, the picture is now almost clear. It all comes down to your needs, how much secure, scalable and efficient database you want. From most points it is clear that Microsoft’s SQL Server provides some extra features over MySQL and is more trusted in the development market.